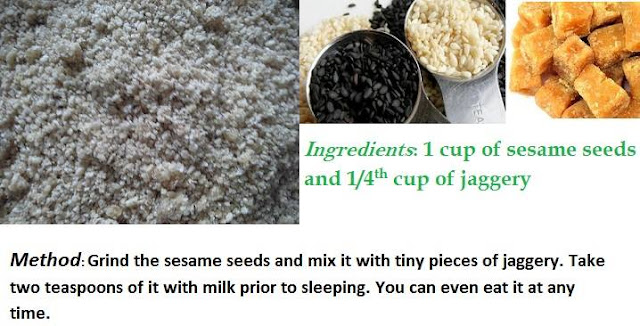 A few days ago, my dear friend Nautre Kahlon posted a traditional Punjabi recipe on Facebook group Healthy Recipes by Homemakers. This sweet delicacy called Kullar, a true delight for many in Punjab and north India, made from sesame seeds (Til in North India) and jaggery (Gur) has been used by our grandparents to stay warm and get rid of debilitating joint pain during the cold winter days.

This lip-smacking medicinal delicacy inspired me to explore its scientific basis. To my surprise, I discovered research papers that attested to its medicinal qualities. According to a recent report in the International Journal of Rheumatic Diseases, sesame seeds are superior to most-used medicines as far as knee arthritis treatment is considered.

Based on a report compiled by Azerbaijan’s Tabriz University of Medical Sciences, the study found that sesame seeds offer better and more effective results compared to common non-steroidal anti-inflammatory drugs (NSAID) when prescribed to patients suffering from knee arthritis traced to degenerative tissues.

The Centers for Disease Control website warns that in the United States alone 12 percent of people aged over 60 are victims of degenerative knee osteoarthritis. With age, the cartilage, a rubber-like soft tissue responsible for smooth bone movement of bone surfaces, develop spurs or become thin. This results in friction between bones in knee and other joints and patients experience pain, swelling, and loss of motion. Symptoms become worse with time.

Doctors prescribe Tylenol, ibuprofen, and similar NSAIDs that help control pain, but without impact on the progression of arthritis. Tylenol is known to cause liver failure and a host of other serious side effects. Other NSAIDs are also not without any adverse effect.

The researchers found that sesame seeds offer better results in the long-term, prevent the progression of diseases, that too, without causing any side effects. In a study, fifty patients were divided into two groups of 25 each. One group was prescribed a combine Tylenol- glucosamine therapy, two Tylenol Tylenol 500 mg twice daily and one glucosamine 500 mg daily. The second group is treated with sesame seed powder, with each patient taking 40 grams daily.

A similar Taiwanese study published in 2013 concluded that sesame seed and oil had potent therapeutic effect to cure arthritis. It reduced acute inflammatory response significantly in rats during a clinical experiment.

Sesame is a wonder drug in your kitchen. It is one of the culinary world's magic seeds that are resistant to rancidity. However, when the seeds are hulled, they become prone to rancidity. It’ best to refrigerate them in air tight containers.

Sesame for Joint Health
Its effectiveness in joint pain relief & rheumatoid arthritis is attributed to its copper & calcium content. According to whfoods, " copper plays an important role in the activity of lysyl oxidase, an enzyme needed for the cross-linking of collagen and elastin—the ground substances that provide structure, strength and elasticity in blood vessels, bones and joints."
Sesame is also rich in copper, manganese, magnesium, phosphorus, zinc, iron, and dietary fiber. People with allergic reactions to nuts may develop food allergy to sesame.

Sesame Recipes
Sesame Tea
Grind 1 tbsp of sesame and boil it in 1 cup of water for 15-20 minutes on low heat. Your sesame tea is ready.

Dry roast sesame seeds or you may use them without roasting. Grind jaggery and sesame seeds into powder. Mix both and enjoy 1-2 tbsp of this healthy powder regularly for joint pain relief.