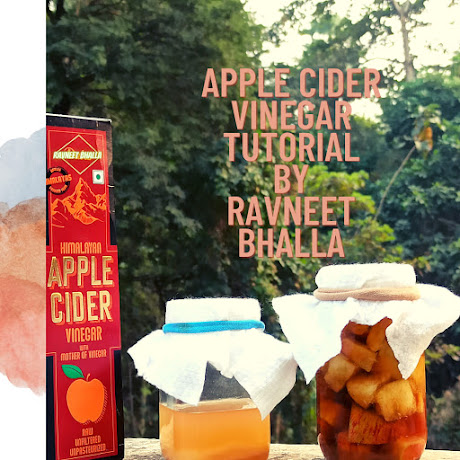 Chalo ji Let's start with the next project Apple Cider Vinegar from scratch ACV is integral to my baking regimen. So here's presenting my fermented apples recipe, which TASTES and SMELLS the same as any storebought ACV. What's more, it WORKS the same as well. What more do I want? Now, no more buying ACV. Start now, friends. This is the BEST TIME to make your ACV at home. It is a super easy process too. You must try to include apple cider vinegar in your dietary regimen. Besides other benefits, it helps with acidity and digestive issues. Try making it at home and you will never go back to the storebought stuff. I think apple cider is the easiest to make.

What is apple cider vinegar?

Well, ACV is nothing but fermented apples. ACV contains some pectin, folic acid, vitamin C, and vitamins B1, B2, and B6. Small traces of potassium, sodium, calcium, phosphorus, and magnesium are also found in ACV.

Acetobacter spp. are a subgroup of acetic acid bacteria which play an important role in food industry specially in vinegar production [6]. Recent studies have shown that these bacteria have some characteristic of probiotics and they are considered as potential probiotics [7]. 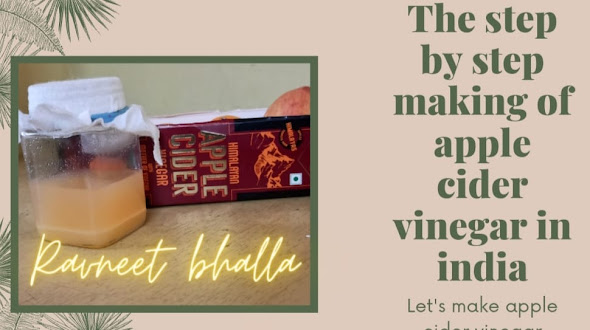 What type of bacteria is acetobacter?

This type of batceria plays a role in acetic acid production, which helps convert food into vinegar.

Where is acetobacter found?

This type of batceria plays a role in acetic acid production, which helps convert food into vinegar. Where is acetobacter found?

This type of bacteria is present in flowers, fruits, and soil and is known to produce acetic acid, which facilitates conversion of foods into vinegar.

Is acetobacter a probiotic?

A genus of acetic acid organism, Acetobacter helps in the conversion of ethanol to acetic acid upon coming in contact with oxygen. This means the food that you are trying to convert to vinegar should get access to oxygen besides acetobacter. Acetobacter plays a role in oxidizing lactate and acetate into H2O and carbon dioxide.

Pure, unrefined, unfiltered apple cider is a probiotic that is good for your gut and can kill harmful bacteria. However, due to its high acidity, apple cider vinegar can damage teeth. In my case, it is my go-to remedy for a sore throat but some people complain that apple cider vinegar hurts their throat, so it all boils down to your sensitivity levels and how your body reacts to different ingredients. In some people, ACV abuse may upset the stomach. Abuse is not something that you should be doing.

How do you clean your gut?

Is it better to drink apple cider vinegar in the morning or at night?

I suggest sipping ACV in the morning on an empty stomach. It helps with acidity and gastritis too.

Is it better to drink apple cider vinegar in the morning or at night?

What is the side effect of apple cider vinegar?

Since ACV is acidic, it might cause plaque deposits on your teeth or erode them. SO make it a point to rinse your mouth after you take ACV.

It is reported that ACV helps with weight loss, though research is underway in this regard to find if and how apple cider vinegar helps one lose weight.

ACV is believed to be effective as a cholesterol remedy.

some FAQs on how to make homemade apple cider vinegar?

it's perfect dear..they ll continue to float for at least 2 weeks..just keep stirring daily.. that's it

Q. What do you do with the residue after decanting?

the residue is very sour since it is completely acidic and all the sweetness from apples is gone....if you find it palatable enough, you may eat it as chutney..otherwise it needs to be in the compost.

Always start small. So you may either take 1 or 2 apples. So if you take 1 apple, take 1 tbsp of jaggery. Take 2 tablespoons of jaggery or sweetener of choice if you want to ferment 2 apples.

Water is the third and most important ingredient. It should be non-chlorinated.

I have used RO water. It works. Chlorinated water might have problems with fermentation.

Chop and core apples. You may discard the seeds. I always do.

Mix jaggery with water and pour over the apples. Try to press apples as much as possible in the jar.

You need as much water as can cover all of the apples.

We want to ensure all the time that apples remain under the water. That's it.

Cover with a muslin cloth or cotton handkerchief.

Keep at room temperature all the time.

You may start to notice bubbling activity the next day, which will be on its height the next two weeks.

When bubbles are gone, that shows the yeast has eaten away all the sugar and is hungry again. But you do not need to add any more sweetener now. We want the yeast hungry.

That's when the process of turning the solution to vinegar starts. Hungry yeast releases acetic acid, which adds sourness.

The main factor that plays a decisive role in apple cider vinegar making in India or abroad is acetobacter bacteria.

After 3-4 weeks, your ACV should smell strongly of vinegar and taste extremely sour.

Mine smells the same as the storebought stuff.

If you want apple cider with the mother, then you will need to leave your ACV after decanting (that is, separation of solids from liquids after 3 weeks) on the counter for 1-2 months UNDISTURBED.

In summers, the process may be quicker than winters.

You will see a film or blob floating on your acv. That's the mother, which may sink to the bottom when you touch the jar or shake it.

The mother is your ticket to making apple cider vinegar the next time speedily.

It will help speed up the process of fermentation.

How many times a day should you drink apple cider vinegar?

Once a day, that too, on an empty stomach. You may dilute it in water and stir in half a teaspoon of honey to balance out the flavors and make it easier to gulp down.

Do not forget to check my Lacto-fermentation series in India, which gives you gut-friendly probiotics.