October 13, 2013
The customary practice of giving bridal gifts to our daughters on their marriage has taken the form of the evil practice of dowry. It is that evil that has permeated all sections of Indian society, forcing several parents toward penury.

I am saddened and distressed at the sight of hundreds of thousands of girls and their parents who are forced to suffer at the hands of the greedy groom family. If the girl's parents fail to fulfil their greed, the girl is either forced to commit suicide or killed. Yes, in both ways the girl is doomed.

Do we girls deserve this treatment?

With a majority of the population in India below the poverty line, parents find it hard to fulfil demands of groom's family, since this is not just about bridal gifts, but more about forced demands from the groom and his family. In a majority of the cases, dowry is the root cause of the problem of female feticide. Would you disagree?

Since parents of the girl know they would be forced to submit to the greed of the boy's family, they try to kill their unborn daughters in the womb so she does not come in this world of greedy people.

Is it the best solution?

Poor parents who are forced to submit to the boy's family's are sometimes dragged to the doors of penury. In some cases, when they do not submit, their daughters are forced to take drastic steps, like committing suicide, to save their parents from the shame of keeping a married or unmarried girl at home.

Indian society is biased toward male sex, and the parents of boys consider themselves as superior, who can demand just anything from the girl's family.

I think parents are responsible to a great extent in giving airs to this heinous practice of dowry. The custom of bridal gifts has assumed greater proportions in the form of forced bridal gifts, in which the groom's family seeks bigger, costlier gifts from the bride's family --to fulfil which they even go to the extent of calling the marriage off on the very day of marriage - or bringing disgrace to the girl's family by boycotting the marriage and returning from the doors of marriage.

Such acts often force parents of the girl to cave in to their demands merely to save their pride and safeguard their girls from social ostracism (girls whose marriages cannot solemnize or break on the marriage day are looked down upon in India to the extent that in most cases nobody ever marries them or if someone does agree to enter into a wedlock with them, they demand dowry - so this means girls and their parents continue to be caught in the vicious cycle of dowry - the very reason their marriage broke earlier).

I sometimes wonder why parents of the girl need to give even a single penny to the guy's family? If the boy's parents had raised their son, didn't the girl's parents do the same?

I am saddened to reveal that this is the reason girls continue to be unwanted in most families. The birth of a girl child often brings clouds of doom in families!


Boys & Girls Wake Up
Why does this happen? Why is the purest relation between a husband and wife hanging on the brink of dowry?

This brutal practice of dowry needs to be stopped. What can be done?

Why can't we all live happy lives? Why are we fighting with each other? Why such an inhuman, beast-like attitude with our daughter-in-laws just for the sake of material expectations? When you die, you will go empty handed!

WHERE IS THE END?

This is high time we opened our eyes and brought this savage practice to an end before it drags our daughters to the death doors!

Who will initiate. I know merely writing or giving my views on dowry will not change anything unless the pathetic mind-set of the entire society is changed. Yes, it is the mind-set and thought process that needs overhauling.

Who will change it? From where will the winds of change blow? God knows whether that day will ever come....

Girls should take a  pledge that being a daughter, they will not take a penny from their parents to their husband's home. When girls are educated and on their own feet, why should their parents give their hard-earned wealth on their marriage? I totally reject that.

Many girls have shown the courage to walk away from such marriages themselves. I salute their courage because in India this is a bold step that only a very few girls can dare to show.

Girls wake up!!!! Please wake up and take the cudgels in your hands to put an end to this heinous practice once and for all. If you do not initiate and make your husbands understand this, your life will certainly be a hell. 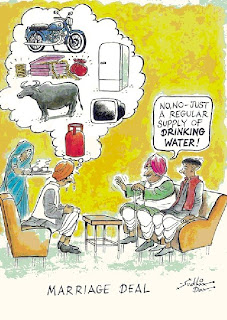 I have seen so many girls being dragged to death, forces to kill themselves -- because their parents could no longer afford to dole out more money to her in-laws. Once the girl's parents stopped giving money, or other amenities, the boy's family forced them to suicide or murdered them in cold blood.

My dear friends, this is the height of brutality. Kindly wake up and show to this world that girls are no less than boys and they stand at a par with them. Once this mind-set changes, lives would certainly bloom.....

Please listen to my voice against the worst crime ever - dowry!